I was happy to be back working on an intensive care unit. Despite the weekends and nights shifts every 6 weeks, I was in a good place. I had joined a dynamic team with a lot of experience, many of whom had been on the unit for a long time. At the time of starting there were also a group of newer staff, D and E grades about my age. There were plenty of great nights out and post work barbecues on the beach.

Drafting these blogs has made me realise how much this post was a real turning point for me. As they sit in my memory, there were 3 stand out moments.

Step 1 was accepting that I might actually develop further than a D grade.

I admit to saying after qualifying (and repeating regularly) ‘I don’t want to move any higher, I’m happiest in this role’ but it wasn’t long before I wanted to do more.

The Ward leader on the Unit was great. She taught me the term ‘helicopter vision’, the value of being able to step back to see a bigger picture. As I gained confidence, I was able to step back a little further, allowing me to see beyond what was happening with my patient (or patients). This allowed me to help with my neighbouring patients and then as I gained further confidence those on the other side of the unit. By doing this I was able to learn how to look after patients more complex than I was capable of at that point.

On an ITU, complex conditions often require more monitoring and more treatment options, these were bewildering to begin with but each shift I was able to take a little more in. Eventually, what first looked like a set of headphone wires that had wound themselves together, turned into a clearly mapped out pathway for treatments to be delivered, monitored and eventually excreted. 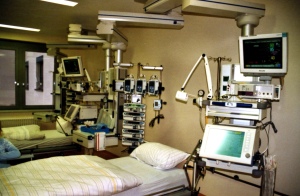 I was hooked, but it was not just the technology that got me. Providing focussed care for patients and helping their relatives to understand the illness, disease or surgical procedure that was making their loved one unwell made me feel like I was making a difference. I was getting the job satisfaction that my previous post lacked.

There was quite a lot of flux on ITU, staff seemed to stay for about 2 years and then either move abroad to work on another ITU or quite differently into community nursing jobs. This flux meant that as new staff came pm those that stayed were pushed further up the the pecking order. After 6 years and several courses and interviews, I found myself as an F grade, where I took charge of the shift to run a 6 bedded ITU, plus a 6 bedded HDU with a 6 bedded CCU also under my guidance.

I was in charge and working with a good mix of junior and experienced nurses. A call from the duty manager came in warning us to prepare for a patient coming straight to ITU from the emergency department ‘he’s really poorly” she said, “he’s swallowed a highly poisonous substance and is going to need cardiac and respiratory observations at least overnight”.

It’s worth bearing in mind this was before the power of Google. The internet was there, but most useful information was locked behind specialist websites with subscription based passwords. We were heavily reliant on advice from in house Consultants and local experts. But, this was a highly unusual case for which there was no specific treatment or cure, there was nothing in the ‘intensive care text book’ to describe what to do. Treatment of his presenting symptoms and the usual antidotes for poisons were all we could do.

Once the patient was admitted we were informed by the ITU Consultant that the poisons the patient had taken would react with his stomach acids. The combination of the two would create a toxic gas that would be expired by the patient, this could harm the unit staff and other patients/ visitors in close vicinity. Those nursing the patient had already complained of an unusual smell emanating from the bedside but no one was poorly. We had to move the patient into isolation as soon as possible and would only be able to enter the same room as the patient when wearing full chemical body suits.

The ITU Consultant, Registrar and my team came worked hard all night to get the patient stable. Two of the team volunteered to don the chemical suits and I covered them for breaks. Wearing the suits was hot work, you could not wear them for much longer than 30 minutes before becoming dehydrated.

It was so hard to look after the patient whilst inside the chemical suit. The patient was delirious and until very near the end had no grasp of the impact of his mistake. I can remember trying to communicate with him to explain what we were trying to do but without direct touch and talking/ listening being really difficult it felt futile and that nothing we did was making a difference.

I think in the end, with several staff repeating the same message over the course of each shift, he eventually understood the gravity of the situation. By that time however he was nearing respiratory distress and required invasive ventilation.

We did all we could to neutralise the toxic effects of the tablets, but the gases that the patient was producing were also causing lethal cardiac arrhythmias. Despite every body system being supported and we were eventually unable to revert the arrhythmia’s and so in time the patient slowly deteriorated until his heart stopped.

We never did find out why the patient took the tablets, even if it was a cry for help. I had looked after many people who we had not been able to treat, many of whom had died unexpectedly but this was different. For some reason the impact of this patient shook my foundations slightly. Looking back I think this was where I should have moved on to work somewhere else but at that point I was not brave enough to leave the safety of what I knew and try something different.

Step 3 was, for me, a traumatic one and a patient that stays with me to this day.

It was a hot summers day, and I was preparing a room for a patient coming up from ED. The patient had meningitis, this is inflammation of a part of the brain due to an infection. The infection itself requires antibiotics for treatment and usually responds well to treatment. But the body’s response to the infection is harder to treat. As the body releases various chemicals to destroy the bacteria these can have drastic effects on the bodies cells, blood vessels and organs. Managing this response requires intravenous fluids, blood pressure supporting drugs, drugs to reduce the bodies response to the infection and provision of oxygen.

The patient was a young lad, not unlike me at that age, into his skateboarding and bmx. He was a little frightened but chatty as we admitted him. Our aim was to get him stabilised and then to consider a transfer to a neighbouring Trust that looked after paediatric patients more frequently than us.

Once we had admitted the patient and started non invasive monitoring we could see that he was deteriorating. He needed invasive monitoring that needed to be inserted into a main vein and an artery in order for us to see exactly what was going wrong with his body systems.

We were already set up to do this and so very quickly had direct arterial blood pressure and oxygenation monitoring in place. He was struggling. He needed more oxygen than he was able to get through a face mask. We informed his family that he needed sedating so that we could manually provide oxygen directly into his lungs and support his breathing. Before we did this we wanted them to come and see him whilst he was awake to say hello and to reassure him.

So far this was nothing unusual but once we had sedated and intubated him his blood pressure rapidly dropped. We started blood pressure supporting drugs and gave him lots of intravenous fluids but none of these were working. His heart was failing, his lungs were starting to fill up with fluid as his heart was unable to pump what we were giving him around his body. This was all related to the bodies overwhelming response to the infection.

He had every drug we could give him, he had every different kind of breathing support the ventilator could provide but none of this was enough.

We brought the family back in to see their son. He was extremely poorly. His limbs were starting to change colour as the blood supply was unable to reach them. He was attached to every form of monitoring whilst we tried to save him.

We did everything we could and yet, 6 hours after admitting the patient, I was laying him out with his family. The staff on the unit did all they could to support the family. We had the Trust chaplain called in to help them and us and talked through all that had happened.

As the Consultant, myself and the chaplain talked to the family I could feel fibres of myself breaking. I knew that I couldn’t do this role anymore. I knew I needed to make changes before this hurt me more than I could repair. Afterwards I can remember sitting outside by the lake, shaking with emotion, unable to imagine what the family would now go through.

Intensive care is a fantastic but tough environment to work in. Whilst you have the luxury of an anaesthetist never further than a bleep away, every drug and piece of machinery to support bodily systems and a team of highly skilled colleagues never further than a step away the job is still hard.

So. Over 7 years having given everything I had to the unit I left. Some of the team I worked with then are still there now. Clearly it doesn’t affect everyone like it affected me. But it also taught me 3 key lessons.

One, make sure you have job satisfaction.

Two, surround yourself with a good team and support each other and

Three, be aware of yourself and the impact that stress can have upon you and your loved ones and ensure you have a strategy to deal with it.